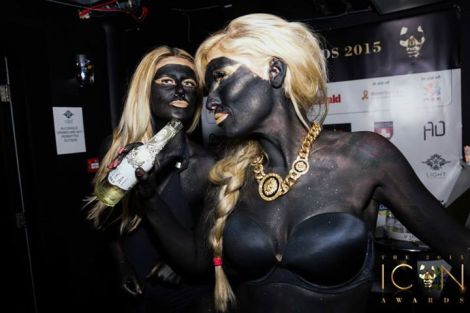 On the 17th of July, following the decision of one of the event’s sponsors to withdraw their support, the Icon Awards have released a statement announcing they will be removing the images of blackface from their publicity, and will not be using them in future. Below is our response.

We are pleased to announce that the Icon Awards have committed to removing blackface from their marketing material and refraining from using blackface going forwards.

They have also invited the EUSA BME Liberation Group to a meeting where we will hopefully discuss their responsibility to be conscious of the impact of their actions. We are happy to meet with the Icon Awards but remain utterly disappointed that we have had to release two statements and place pressure on sponsors before the appropriate action was taken.

This situation and the response from Icon Awards and their supporters has only highlighted the despicable level of racial ignorance in our community which affects people of colour on an everyday basis. It has also made it clear that there is a widespread misunderstanding of what racism is and how it manifests in our society.

As President Obama recently said, racism is not about avoiding the use of the ‘N’ word. Racism has manifested itself in institutions and behaviours throughout society, including but not limited to everyday language, attitudes, oversights and disregard of how certain actions affect communities of colour.

Although sometimes unintentional, and often invisible to perpetrators, these actions are just as damaging as overt and intentional acts of racism.

It is clear that some struggle to identify particular forms of racism and how they are oppressive, because they do not belong to communities who are affected by racism daily or are not conscious of the wider impact of forms of racism that they do not find personally oppressive. Nevertheless, if we are to build a truly liberated society it is necessary that those who feel oppressed are able to freely express this and lead discussions on liberation without the defensive and often louder outcries of those who have perpetrated the act of racism. All too often communities of colour are silenced and policed – accused of “playing the race card,” being “oversensitive” or being “racist” for expressing their oppression. This is unacceptable, and is in itself oppressive.

We urge all individuals and organisations to be conscious of the marginalisation of certain communities and to ensure that their actions, behaviours and attitudes do not contribute to oppressive institutions.

Finally, the EUSA BME Liberation group would like to thank those who have supported us in attaining the Icon Awards’ commitment to a conscious output going forward.

On the 14th of July, the Icon Awards responded to our original statement (which you can read below) calling on them to apologise for their use of blackface. You can read this statement here.

This is our response.

As an event which deals with identity politics, and claims to encourage an inclusive and diverse LGBT+ community (although we find this hard to believe, since they are charging £120 for a ticket to their commercial event), the Icon Awards have a special responsibility to be aware of the connotations and consequence of their marketing output. Yet a team of “16 respectable” organisers have ignored the deeply painful precedents of blackface and have blackened the faces and bodies of models as part of a marketing strategy for their recent LGBT+ event.

On the 13th of July, the EUSA BME and LGBT+ Liberation groups issued a co-signed statement calling on the Icon Awards to apologise for this act and refrain from using such oppressive imagery going forwards. However, they have chosen to respond by denying the use of blackface, instead insisting that the blackened faces and bodies of the “statuesque” models were “artistic” with no derogatory or negative intentions.

As we made clear in our previous statement: “…intent is irrelevant. In no other situation would we be expected to forgive someone who had hurt us, simply because they did not ‘mean’ it.”

In no other sphere of our society are intent and art the sole arbiters of whether responsible should or should not be taken. Apologising “to anyone who has take offence” is not the same as apologising for your offensive actions. If the Icon Awards genuinely did not intend to engage in oppressive behaviour, they would have issued a full apology, acknowledged their mistake, and committed to no longer using blackface in their promotional materials. They have done none of these things.

In choosing to prioritise their so-called “artistic impression” over the thoughts, feelings, and history of Black communities, the Icon Awards have shown a blatant disregard for Black people, and particularly those who identify as LGBT+. They have continued to perpetuate the marginalisation of People of Colour within the LGBT+ community, which has existed for far too long. Their refusal to take responsibility for their actions, signifies a further twist of the knife in the back of the Black LGBT+ community.

Blackface is – regardless of intent – damaging, gut wrenching, and dehumanising to Black communities. This incident, and the reaction – from both the event organisers and their supporters – has deeply shocked and sickened Black communities across Scotland.

We should never have had to issue our original statement, but it is even more unbelievable that a second statement had to be written, again calling for an apology where instead the team at Icon Awards has issued a defence of their despicable actions.

We reject the Icon Awards’ statement and now call on the sponsors of the event to withdraw their support unless our calls for a full apology and removal of all blackface from promotional materials are met.

Organisations who are currently involved in the Icon Awards include:

Below is a statement written by Edinburgh University Student Association’s Black and Minority Ethnic (BME) Liberation Group regarding the Icon Awards’ use of blackface in promoting their event.

“The use of blackface (the act of using theatrical make-up to darken a performer’s skin, usually in order to portray a Black character) has long been recognised as an insidious form of racial hatred and ignorance. Historically, it has been used to mock, degrade, and perpetrate negative stereotypes, dehumanising people of African decent and our identities. Yet despite this, we continue to see the use of blackface today.

We were recently made aware that the Icon Awards – a Glasgow-based awards ceremony for the LGBT+ community* – have been using models in blackface to promote the event, including at last month’s Edinburgh Pride. The use of this despicable practice is incredibly damaging and actively perpetuates the oppression of Black communities. In this context, it is particularly harmful to those who identify as both Black and LGBT+, for whom this incident is a reminder that they are not fully accepted, even within the LGBT+ community.

While some may argue that race is a social construct, it is undeniable that our race informs our identity and how we are received in society. Our identities are not accessories, and blackface is not simply an innovative new way to promote your event.

For People of Colour, race is not simply a costume we can remove whenever it is convenient, it defines us.

As part of the fight to liberate ourselves from the injustices of racism, which continues to be pervasive throughout this society, we stand firmly against the use of blackface.

Some may seek to defend the actions of the Icon Awards by arguing that there was no malicious intent, but the intent is irrelevant. In no other situation would we be expected to forgive someone who had hurt us, simply because they did not “mean” it. It is deplorable that an organisation which seeks to celebrate the LGBT+ community and its strides for liberation has thought it acceptable to use such an oppressive measure. A measure that isolates and oppresses many within the LGBT+ community.

We call on the organisers of the event and its promoters to issue a sincere apology and commit to no longer using blackface to promote future events.

* Please note that the Icon Awards are a commercial awards ceremony, run for profit, and in no way linked to the Equality Network’s Scottish LGBTI Awards, which will be taking place in September. If you do wish to recognise and celebrate the achievements of the LGBT+ community, we would recommend the Equality Network’s awards as a positive alternative to the Icon Awards.